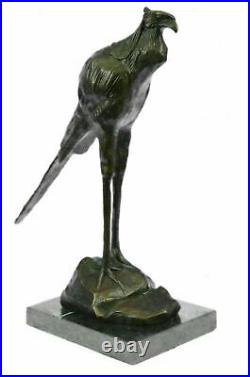 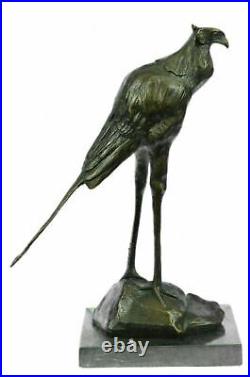 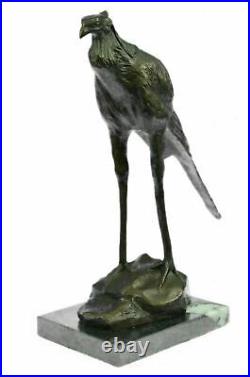 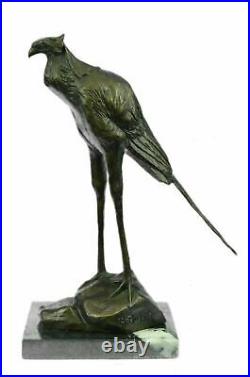 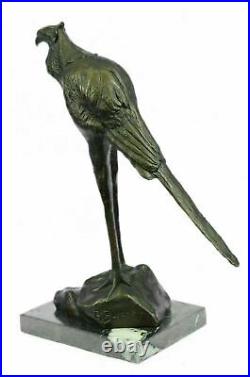 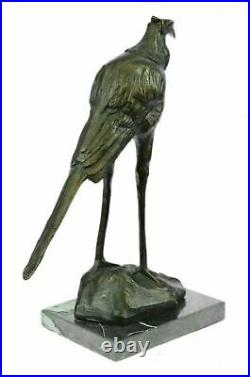 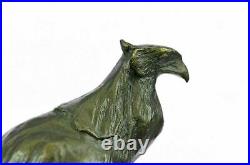 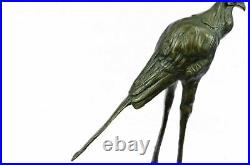 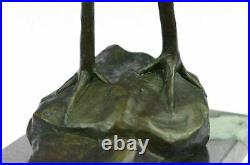 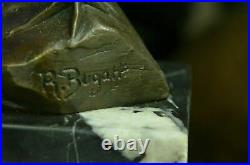 BRONZE SCULPTURE HAND MADE STATUE REMBRANDT BUGATTI STORK EXOTIC BIRD ARTWORK. This product data sheet is originally written in English. Condition: This sculpture is in a very good condition. Bronze Dimensions with Marble Base:Height 11″ x Width 10 1/2″ Marble size: 5″ X 4″ Height without base:10 1/2 Weight : 5 LBS Inventory : 26K1583662. This Bronze Piece is signed by Rembrandt Bugatti, a famous Italian artist. This Bronze Sculpture is of a Secretary Bird. Standing tall with crane like legs and long wings, this bird is breathtaking. Bugatti captures the realistic characteristics of the animal and puts life into the sculpture. The sculpture was made using the “Lost Was Method”. A simply gorgeous piece with class, bring some class in to your home today. Below you will find information about the Secretary Bird and the Artist. The Secretary bird or Secretary Bird (Sagittarius serpentarius) is a large, mostly terrestrial bird of prey. Endemic to Africa, it is usually found in the open grasslands and savannah of the sub-Sahara. Although a member of the order Accipitriformes, which also includes many other diurnal raptors such as kites, buzzards, vultures, and harriers, it is given its own family, Sagittariidae. Its common name is popularly thought to derive from the Crest of long quill-like feathers, lending the bird the appearance of a secretary with quill pens tucked behind his or her ear, as was once common practice. A more recent hypothesis is that “secretary” is borrowed from a French corruption of the Arabic saqr-et-tair or hunter-bird. [6] The Secretary Bird has traditionally been admired in Africa for its striking appearance and ability to deal with pests and snakes. As such it has often not been molested, although this is changing as traditional observances have declined. [6] The Secretary Bird is the national emblem of Sudan as well as a prominent feature on the Coat of arms of South Africa. In Sudan, it is featured in the middle white strip of the Presidential Flag; it is the main object on the Presidential Seal, and features heavily in Sudanese military insignia. The Secretary Bird on the Presidential Flag and Seal has its head turned to the right, with its distinctive Crest clearly visible and its wings spread out with a white banner between its outstretched wings reading “Victory is ours”. About the artist: The artists name is Rembrandt Bugatti; he came from a very famous family of artists. His uncle was a famous Italian Impressionist painter named Seguantini. His father was Carlo Bugatti, who was a painter, and also designed furniture. He made this fantastic, sort of, Middle Eastern style furniture that was covered in parchment and copper and all kinds of wonderful jewels. Rembrandt Bugatti was very successful right from the start. He started very young. He signed a contract when he was only 20 years old to produce bronzes. He loved animals & did mostly animals. Most of his Bronze Sculptures are done in sort of an Impressionist style, and they`re wonderful because they really capture the spirit of the animal itself. You get a real feeling for the animal and how it behaves and the character. And it`s done in what`s called the “lost wax” technique, which yielded a very fine casting. Virgin Islands, however, an additional charge may be required. New Detailed Hand Crafted Hot Cast Bronze Not Resin Satisfaction Guaranteed. This is Stock Photo, Slight Color Variation! Listing and template services provided by inkFrog. Although a member of the order Accipitriformes, which also includes many other diurnal raptors such as. Increase your Sales Abroad with WebInterpret’s Global Listing Solution. This item is in the category “Art\Art Sculptures”. The seller is “think_bronze” and is located in this country: US. This item can be shipped worldwide.